helloSystem, a "out of the box" BSD distribution, built in the image and likeness of Mac OS X 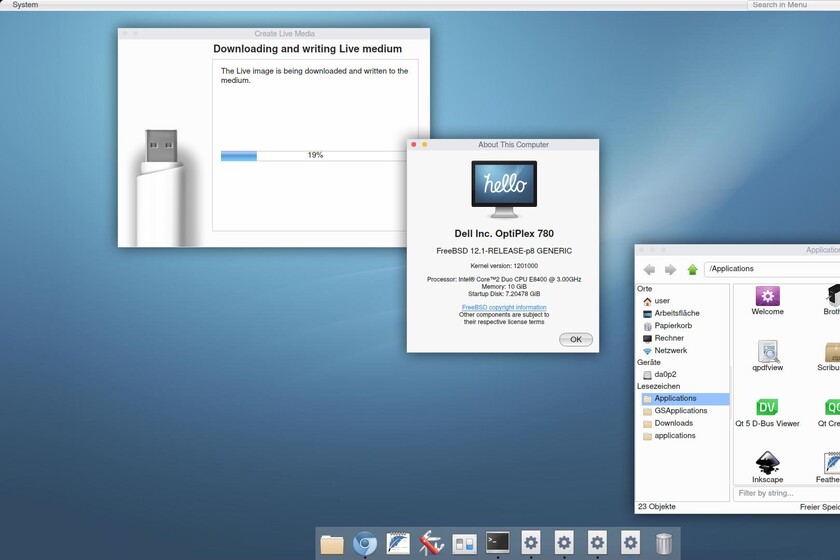 We have previously discussed on this page the existence of a set of operating systems known collectively as * BSD, which - like its 'cousin' GNU / Linux - is part of the Unix family.

Except Darwin (which is to MacOS / iOS what MS-DOS was to early versions of Windows), the most popular of the BSD systems is known as FreeBSD.

But this, as with Linux, you can have various 'distributions', equipped with a particular software and configuration on a common basis. Examples of this would be FuryBSD or Desktop BSD.

And recently, a new FreeBSD distribution is gaining popularity called HelloSystem (specifically, it is based on FreeBSD 12.2), which is characterized both by seeking to offer "a user experience out of the box" ...

... as per base your interface on older versions of its Mac OS X cousinAlthough without looking for an exact replica of its appearance (it is not the first time that the interface of an Apple system has served as inspiration for a Unix distribution, another recent case is JingOS, based on iOS).

"One of the goals of helloSystem is to be easy for 'mere mortals' to use while under the hood continues to deliver power to power users, a combination that had been cleverly mastered in early versions of Mac OS X."

Its founder, Simon Peter, is known for having promoted other relevant open source projects such as the AppImage package manager or Puredarwin (a 100% free version of the 'heart' of the Mac OS X system).

This distribution uses OpenZFS as the default filesystem, and a own desktop environment (based, like KDE, on Qt library) called helloDesktop, which has traditional windows, a basic desktop dock, a unique global menu and a file manager based on PCManFM (from the LXDE project).

Aside from that, your software selection will be recognizable to any Linux user: LibreOffice, Chromium, GIMP, Scribus, Inkscape ...

The first version of helloSystem, 0.1, was released at the end of last November, and they are already on 0.4 (which was released last week). We can download the ISOs here, being aware that, despite the potential of helloSystem, its creators still they do not consider it a production-ready operating system.