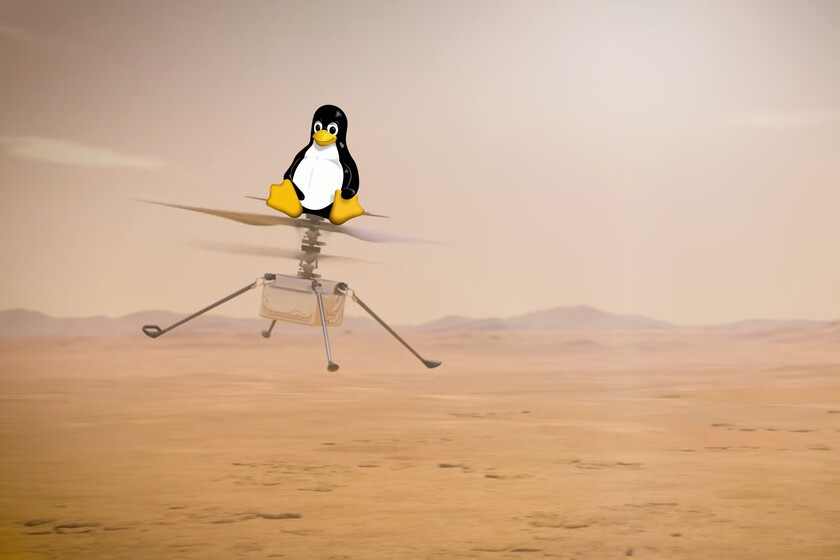 Yesterday was a very special day for space exploration, because we could see live how the Perseverance rover arrived at Mars equipped with everything necessary to travel the red planet for a long time. Key in the discovery process there will be the Ingenuity helicopter / drone that accompanies the rover, and one of its engineers has revealed that the one responsible for making it work is the Linux operating system.

An open source project of NASA

NASA has explained some details about Ingenuity, such as that it weighs only 1.8 kilograms, that it can operate in extreme cold temperatures and that it can do 90-second flights autonomously for 30 days, as they estimate. Control from Earth is impossible since it communicates with Earth with a latency of 10 minutes.

When asked about the helicopter's hardware, Tim Canham, head of the operation with Ingenuity, has replied that the processor that controls everything is a Snapdragon 801, a glorious Qualcomm chip that was acclaimed back in 2014 on smartphones like the LG G3, the Galaxy S5 or the HTC One M8. With it, they can take photos with a 13 megapixel sensor, similar to the one those smartphones carried, and then analyze them at 30 Hz.

As a curiosity, Canham points out that, in terms of software, the protagonist is a Linux-based operating system, with an open source framework developed by the Jet Propulsion Laboratory NASA (JPL) (the laboratory in charge of the helicopter) called F '("fprime"), which the government agency published years ago.

In that sense, Canham recalls that Anyone can personally use the software as they see fit, and proudly states that this case is "a kind of open source victory, because we are flying [el helicóptero] with an open source operating system and on an open source flight framework and commercial parts that you can buy off the shelf if you want to do it yourself one day. This is something new for the Jet Propulsion Laboratory because they tend to like what is very safe and proven. "