This website allows you to check if your email or domain has been used in attacks by Emotet, "the most dangerous malware in the world" 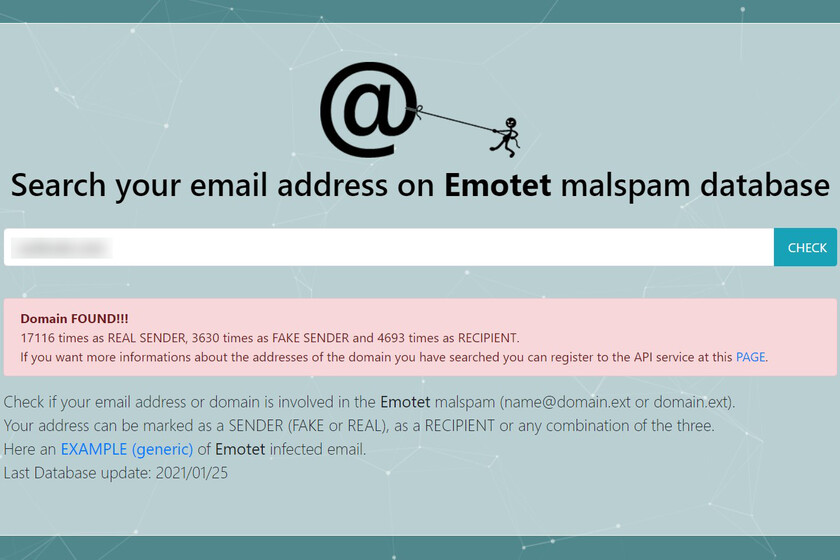 One of the networks of bots largest in the entire planet, if not the largest, was dismantled a few days ago by police and judicial authorities from different countries. Emotet, classified as "the most dangerous malware in the world", was neutralized thanks to the seizure of its infrastructure.

Emotet, as we have told on several occasions, has acted in very different ways. Between them, spreading via email by, for example, checking victims' accounts sending messages on your behalf with infected attachments.

The Have I Been Emotet website allows you to check if your email has been used in attacks by Emotet, one of the most famous and prolific botnets on the planet

To check if our email addresses or domains have been used by this botnet or have been the target of malicious messages the Have I Been Emotet website has been created.

Have I Been Emotet, searching the database malspam by Emotet

Those responsible for this portal have been professionals from the Italian cybersecurity company TG Soft. What they have done has been to enable a search engine on this web page that allows you to enter an email address or a domain and know if you have been involved in any of the Emotet attacks.

The database used from this malware what started in 2014 as a banking Trojan it is regularly updated and was last updated on January 25 at the time of writing. Recently, by the way, Emotet was sabotaged by a hacker.

To give us an idea, when the tool appeared, this database only contemplated the actions of Emotet between the months of August and September 2020. A period that may seem short, but in which about 2.1 million email addresses were registered and about 700,000 outgoing emails.

Use Have I Been Emotet It is as simple as using the star tool of this type, I Have Been Pwned: We enter the email or domain that we want to search for and click on the button Check. If our domain or address has been used, the web will indicate whether it has been used to send emails directly, with SENDER REAL; if it has not been used directly, but it has been supplanted, with SENDER FAKE; or if it has been recipient, with RECIPIENT.